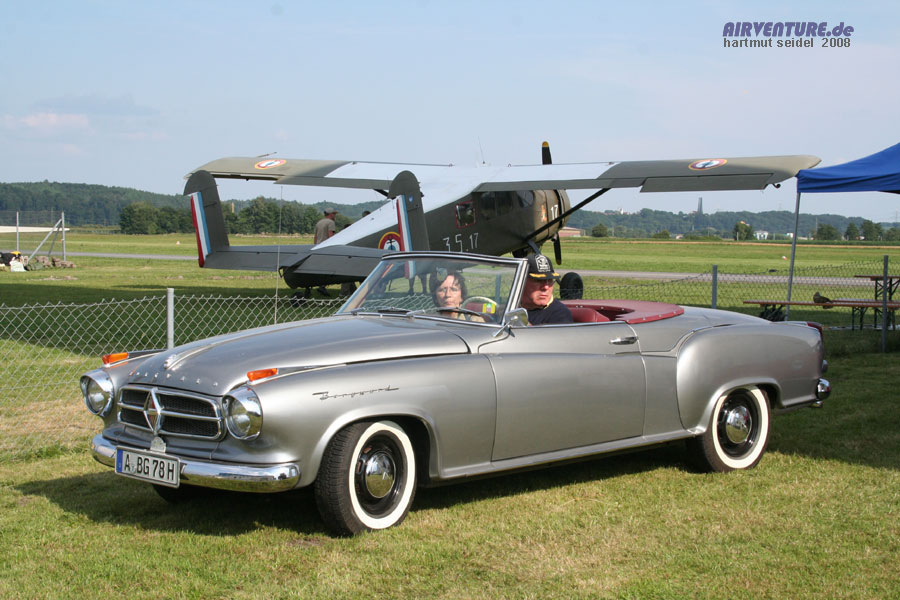 [QUOTE=Aimee;1621330]L4P has grown beyond the States and made friends from all over the world. With that has come some amazing cars that have been shared on the 4 which many of us would probably never get to see. The next collection is just that example. It comes from the UK. I owe my friend Leslie Rentcome a thank you for putting me in contact with the owner. The owner chooses to remain anonymous but the collection of cars is held at JWB Classics in the UK. They actually hire out the cars for Television, Advertising or Media Publications. This collection mostly boasts everything from classics, cult cars, and a few rarities that some of us have never seen. The only thing is, the shots are outdoors. So this is a Garageless collection. They keep their location quiet.


JHW Classics takes great pride in collecting and preserving some of the greatest automobiles ever made. With a stock ranging from a BMW Isetta all the way up to a Lamborghini Miura S.

AC 438 FRUA
With just 51 built, this 1969 Frua-bodied British GT shares its chassis with the legendary Shelby Cobra, its engine (large block 7-litre V8) with the mighty Ford Galaxie 500 saloon-car racer, and its styling is similar to the Maserati Mistral of the same vintage.

AMPHICAR
This Concourse winning Amphicar was built in Germany in 1964, and has recently undergone complete restoration. Out of a total production of 3,878 vehicles, only 7 still exist in the UK. It is rear-engined and uses a 4 cylinder Triumph Herald engine producing 43hp. The Amphicar has a top speed of 7mph on water and 70mph on land. Hence, it was dubbed the “Model 770”.

ASTON MARTIN LAGONDA
Designed by William Towns in 1976, only 645 Lagondas were built. This is one of the later Series 4 cars (1990) originally part of the renowned Hunter Green collection of Astons, it has covered only 3000 miles from new. Powered by a 5.3 litre V8.

AUSTIN 'RADFORD' MINI
Most Radford minis date from the 1960’s when anyone who was anybody had one – the star car! This was prepared from a 1989 Mini Mayfair and has the uprated 1380cc engine together with the Wilton carpet, the leather upholstery and the Walnut dash.

BMW ISETTA
Manufactured in 1962, the Isetta was one of the first cheap people’s cars. Built in Brighton, with only a 300cc engine, the “Bubble Car” has its only door at the front and opens with the steering wheel attached!

[QUOTE=Aimee;1626446][CENTER]Carver1
Designed in Holland and built in Germany, the Carver is a hybrid between a trike and a car. It is powered by the original Daihatsu Copen engine which sits between the rear wheels, whilst the remainder of the body tilts like a motorbike.

DAIHATSU COPEN
Possibly the very first Copen in the country, privately imported, it is as the name suggests, compact and open, a mini Audi TT with folding metal roof and it’s 660cc engine making it a pocket rocket.

DATSUN 240Z G
Whilst the normal Datsun 240Z is well known and much loved, it’s rally prepared brother with long nose and faired in headlights is a step up. Never sold in this country, this one was specially imported, and has recently undergone complete restoration.

DELOREAN DMC12
Made famous by the Back to the Future films, the gullwing-doored DMC-12 was originally intended as an ‘affordable dream car’ by its creator, former General Motors supremo John DeLorean. Featuring a Lotus Esprit chassis, a Renault PRV V6 engine mounted at the rear and a stainless-steel body, the DeLorean was produced in Dunmurry, Northern Ireland between 1981and 1983. Truly iconic.

FIAT BERTONE X1/9
After Bertone’s design for the Lamborghini Miura caused a sensation with its chassis alone, Bertone set about creating versions of the transverse-mid-engined sports car of all manner of sizes for different manufacturers and roles. The Bertone X1/9 made for the first affordable mid-engined (1500cc) sports car, with design related to Lamborghinis Miura and Uracco, the Lancia Stratos and the Ferrari 308 GT4.

FIAT GAMINE (NODDY CAR)
‘Beach cars’ were an important part of the ‘dolce vita’ Riviera lifestyle of the 50s and 60s. Usually seen parked alongside a moored luxury yacht or a Cote d’Azur beachside restaurant, they were the playthings of the ‘beautiful people’ of the Monaco set. The slightly comical appearance of the Fiat 500-based Gamine made it ideal for Noddy too.

HONDA N600 HONDAMATIC
The Japanese version of a Mini – it is small on the outside and spacious on the inside. Also a rare little car, this 1972 model is one of the very first little cars with automatic transmission.

HUSTLER 6' WOODEN
The futuristic ‘Hustler’ series of cars were designed and built by William Towns between 1979 and 1989. Usually based on the Mini, they featured sharp-edged, angular bodywork in the 70s industrial-design idiom, including sliding glass doors. The ‘Wooden’ used a unique marine-ply monococque chassis in place of the usual fibreglass, and as one of the 80 built that hasn’t succumbed to woodworm, it’s very rare today.

[QUOTE=Aimee;1626482][CENTER]ISO GRIFO
This car was built in 1968 and shown at the London Motor Show that year. (It is claimed that John Lennon sat in the car at the show!) The body was designed by Giorgetto Giugiaro at Bertone and it was produced in Italy with the 5.4 litre Chevy Corvette engine. One of only 322 cars originally built.

JAGUAR E-TYPE
The Jaguar E-Type was an icon of the 1960s, particularly the coupe, of which this is an excellent example. These days, it is considered with the Lamborghini Miura to be one of the most beautiful cars of all time. This car, a 3.8 ltr. Mark 1 in Opalescent Silver Blue is a mint, original, and rare 1964 car which has a factory recess behind the front seats allowing much greater legroom. It is one of the last 50 Mark 1 RHD Coupes built.

JAGUAR XJ13 CATMAN RECREATION
The Jaguar XJ13 is a one-off racing prototype with a mid-mounted 5.3-litre V12 intended to take on the likes of the Ferrari 250LM at Le Mans after the front-engined D-Type was rendered obsolete. This like-for-like recreation has a proper aluminium body – very rare indeed. (NOTE – this car will be available Summer 2011)

JAGUAR XJ220
A sensation when originally launched, the first production car to achieve over 200mph. This example has only 1500 miles on the clock from its first registration in 1997. The engine is a modified Metro 6R4 rally motor with twin turbochargers, taking it to the famed 217 mph and 0-60 in 3.8 secs. It is almost 7ft wide and only 281 were ever made.

LAMBORGHINI LM002
Borne out of a design tender from the US Army to produce an all-terrain military vehicle, the ‘Rambo Lambo’ LM002 marked a total road-car departure for Lamborghini. With a front-mounted Diablo 5000 V12 engine, go-anywhere four-wheel-drive and ferocious Marcello Gandini styling, the Americans’ loss was Lamborghini’s gain. They eventually went for the Hummer proposal, but 301 LM002s were still built, of which only 60 were the later American model, of which this is a prime example.

LAMBORGHINI MIURA S
The very first ‘Supercar’ the Miura is considered the most beautiful car of all time by many. This is the ‘Twiggy’ Miura, so called because its first owner was Justin de Villeneuve (Twiggy’s manager in the 1960s), and I have it on good authority that it was often seen parading up and down the Kings Road.

MAZDA COSMO 100S
When Dr. Felix Wankel’s troublesome rotary engine proved expensive for parent company NSU, Mazda bought the rights to produce it too and set about developing it for reliability. The Cosmo was a rare test-bed (there are only two in the UK), but it proved the rotary could be made reliable, and to boot wrapped it in bodywork reminiscent of Pininfarina’s Ferrari 400 Superamerica Aerodynamica. (Note: example in picture not actual car).

MAZDA LUCE R130 COUPE
After Mazda proved the rotary could be made dependable with their Cosmo, they set about creating a rotary range. Giorgetto Giugiaro, then working for Bertone, was brought in to design an upmarket range of saloons and coupes, and the Luce R130 featured lines almost identical to Giugiaro’s Alfa Romeo Giulia GT.

[QUOTE=Aimee;1626497][CENTER]MESSERSCHMITT
This 1956 Messerschmitt is an exceptionally original car, complete with a matching original specification ‘teardrop’ trailer. Messerschmitts were made in Regensburg, Germany in the 1950s as the company was no longer allowed to manufacture airplanes. But the design was still very much in the spirit of aeronautics – canopy, tandem seating, and a steering column that looks like an aircraft control column! Powered by a 191 cc two stroke engine the performance is quite startling; with potential to reach 60mph, it’s much faster than the 300cc Isetta of the same period.

MINI MOKE
Built by Austin in the 1960s, the Mini Moke was originally designed as a light military vehicle. However it’s much more suitable as a fun run-around – perfect for the beach resort, or indeed for any fans of ‘The Prisoner’!

NISSAN FIGARO
Built in a very short run in 1991 as part of its Tokyo-based ‘Pike’ studio series, Nissan’s Figaro was a ‘retro’ car with a difference. Years before the new Beetle and MINI, the Figaro looked almost indistinguishable from a genuine 50s car inside and out, yet featured reliable, dependable Micra mechanicals with a useful turbocharger attached. As seen driven weekly by Andrew Marr on his Sunday-morning show credits.

TOYOTA 2000GT (PROMO)
Made famous when a convertible version was produced for the Bond film ‘You Only Live Twice’, this is the first Japanese supercar. Only 351 were ever made in the 1960’s and this one has just undergone a complete restoration. Very rare. (NOTE – photo not actual car available)

TOYOTA LANDCRUISER VX
Those in the know swear by these. This South African-market Landcruiser, unlike its UK counterpart, features a petrol 3.5-litre engine. This is the car that can truly conquer the African deserts, and as Top Gear proved, is almost indestructible. It also has a 3.5 tonne winch on the front!

TOYOTA SPORTS 800
The baby brother to the 2000GT, this was Toyota’s first production sports car. Built in 1968 it is also the first car with a targa top and around 3000 were made, but I believe few have survived.

TRIUMPH FURY
The prolific stylist Giovanni Michelotti produced a whole range of Triumph prototypes in the ‘50s and ‘60s. Many made it into production – the Herald and TR4 began this way – but the Fury, intended as an intermediate model in between the Spitfire and the TRs with its steel body and 2-litre six-cylinder engine, never made it to production. Completely unique and a fascinating glimpse at ‘what might have been’.

VANWALL
Whilst you won’t see most Vanwalls from the 1950’s on the road – where they still exist they are mostly in museums – the Vanwall name was recently resurrected with a single seater racing car and this 2 seater touring car. Built with a V12 Ferrari engine it has an aluminium body. 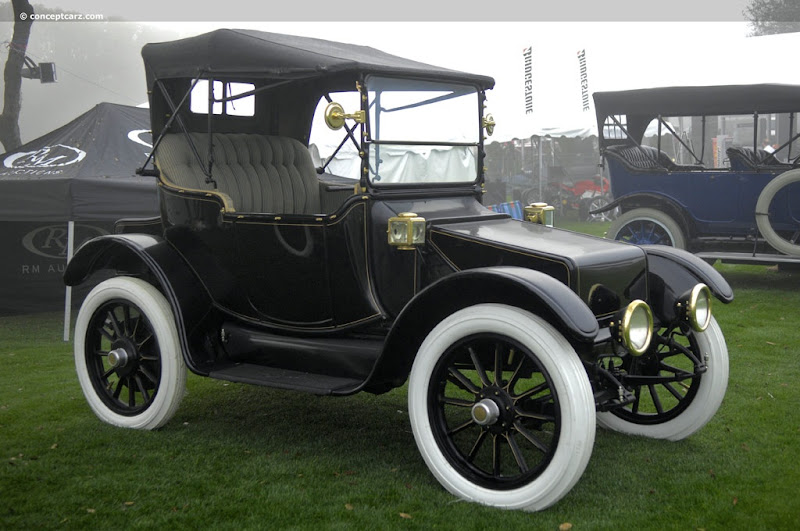 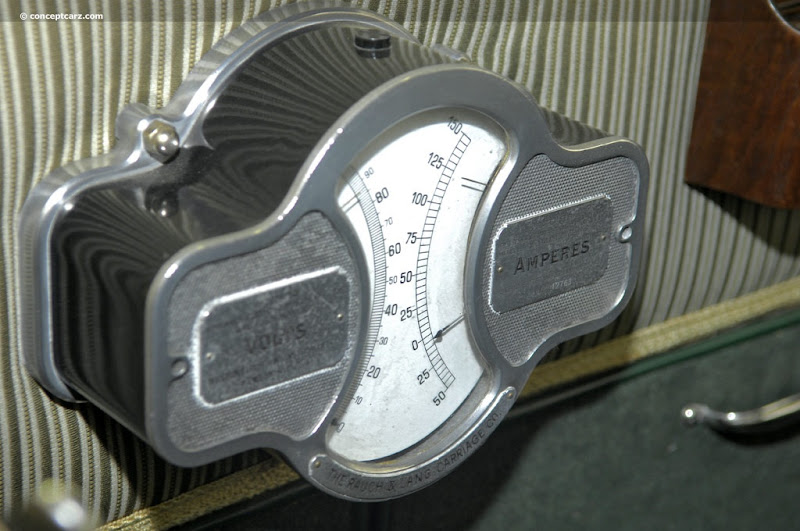 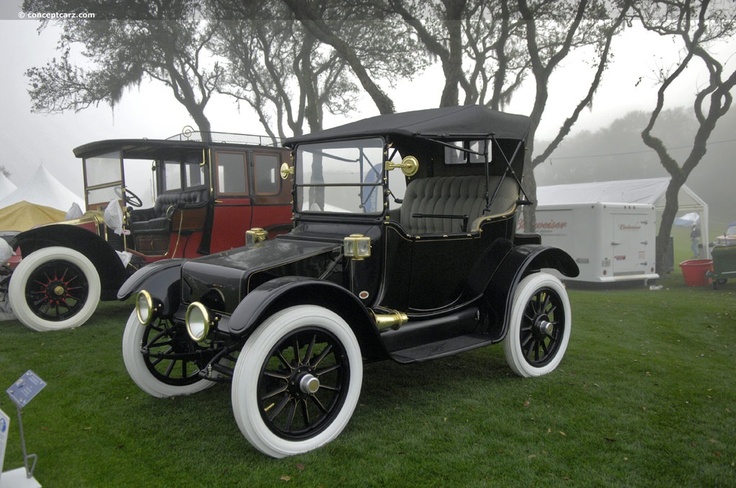 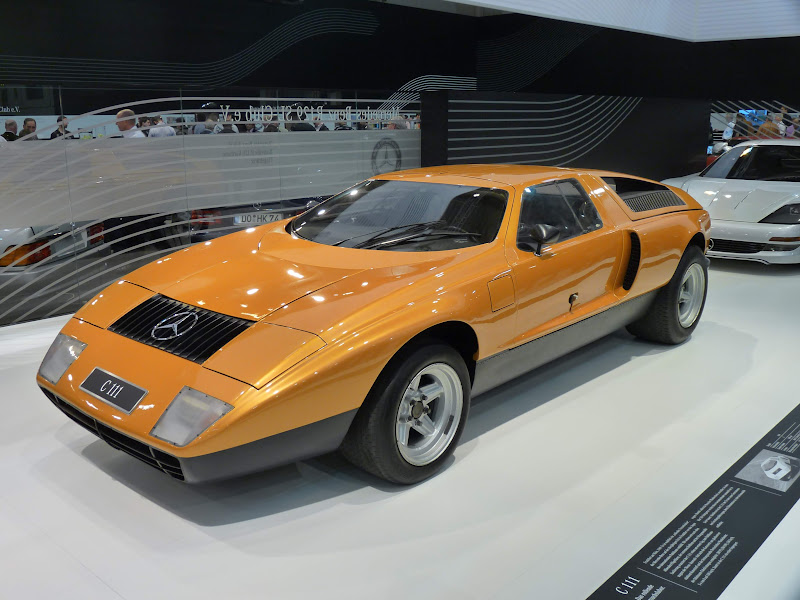 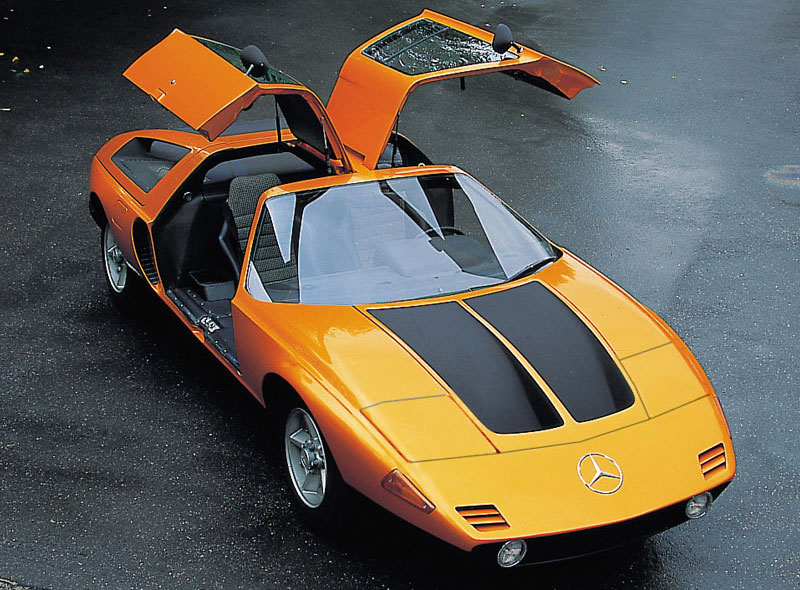 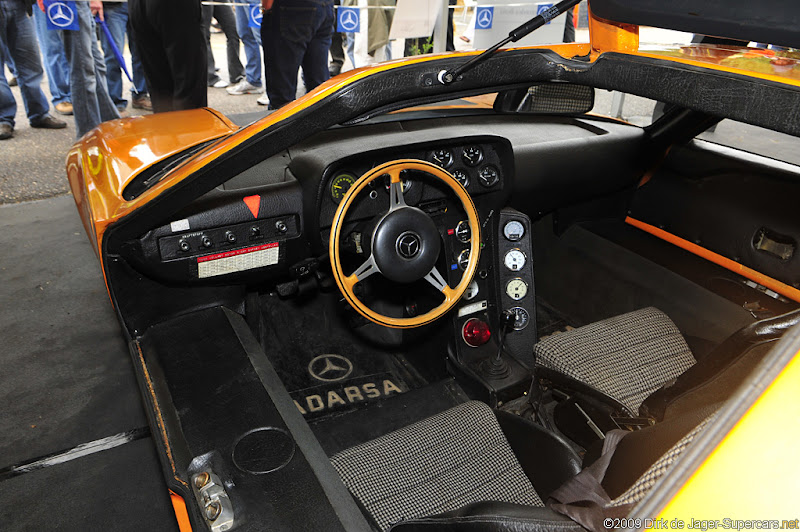 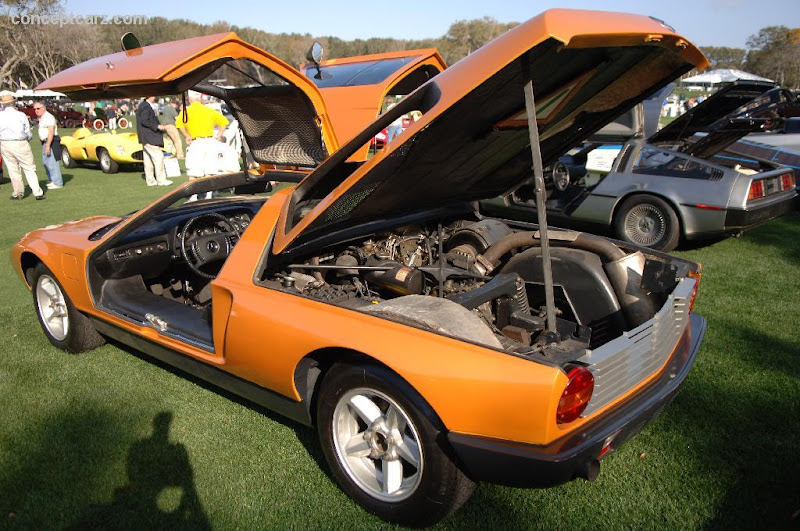 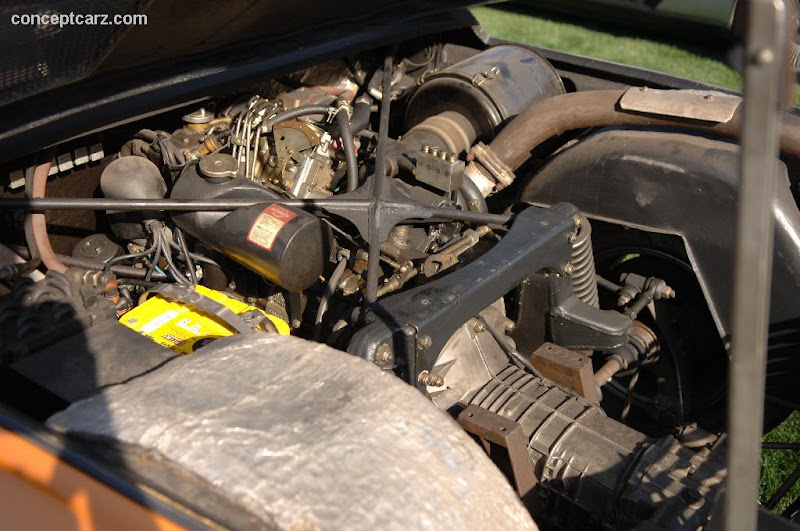